The museum was born as a result of a conversation between then-Chief Gene Tignor and volunteer firefighter Jerry White, while trying to decide what to do with the city's 1938 Ford fire truck. White suggested that a museum be built to house this truck and all kids of old firefighting apparatus.

The museum houses several different fire trucks, the first pull-by-hand hose cart, first wooden ladder, and also the first fire pole used in Kings Mountain. There are old sets of turn out gear, early fire extinguishers, a showcase of past chiefs, and fire patches from around the world.

The Kings Mountain Historical Fire Museum welcomes visitors to its facility. To schedule a tour, contact the Fire Department at 704-734-0555. The Museum is located on Cleveland Avenue just off of the 74 By Pass in Kings Mountain. We also welcome donations of fire equipment for display in the museum.

We are very proud of our extensive collection of patches also. Is your department's patch on display? We welcome patches from all organizations, not just fire departments. Send yours to: 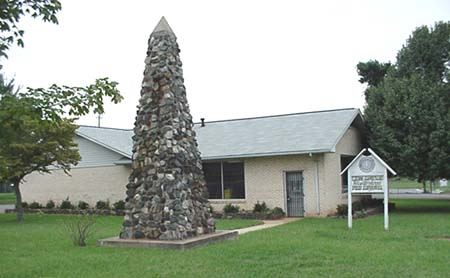 The Museum that Hot Dogs Built
By Hazel Herndon Fryer

True to a fireman's legendary training, they just can't wait around. They've got to do something in a hurry - even if it's building, in three months time, a Historical Fire Museum.

And that's just what happened the summer of 1975 in Kings Mountain, N.C., population 9,000. Only 2 other cities in North Carolina have fire museums.

The attractive small white brick building with dark gray trim sits proudly on its landscaped lot today. The big windows, protected and beautified with wrought iron, look out on Crowder's Mountain in the distance. Two vintage fire engines sit at angles inside the 32' by 34' building, gleaming brightly red with polished chrome. Other relics, both inside and out, are pleasing and educational to see.

"It's amazing what hot dogs and hard work can do," mused Fire Chief Eugene Tignor.

"It all came to life on the spur of the moment," continued Tignor. "I was riding with Jerry White, a volunteer firefighter, and we were trying to decide what to do with the city's 1938 Ford - American La France Pumper Fire Engine."

"Why don't we build a museum and put all kinds of old fire-fighting apparatus on display?" ventured White.

That did it. They started the very next day.

The City Commissioners voted to give them $1,000 and a 105' by 130' lot on Cleveland Avenue next to the Community Center. The rest would be up to the firemen. They accepted the challenge.

The loyal, energetic Firemen's Auxiliary, consisting mostly of their wives and a few interested citizens, pitched in with them. There followed a frantic rush of hot dog suppers at the fire house, rummage sales, flea markets, sponsored basketball games, and "Sings" at the Community Center, and turkey shoots. Donations came in for business materials, much of it given at cost by local business men.

Despite the hot weather, the firemen plunged into their project, learning as they went along. They poured concrete, set up block, covered it with white brick, and put in 3 large windows donated by the city from an old furniture store being torn down for urban development. A volunteer showed them how to put shingles on the roof - it was roofed in one day.

The main attractions inside this building are the two fire engines: one a 1930 model and one a 1938 Ford model. The 1938 pumper was what started the whole museum idea, and in restoring this truck, over 600 man hours were spent by Frank Burns with the help of volunteers. In the event of an emergency, this truck can still be used.

The 1930 engine was the first pumper owned by the City of Kings Mountain in 1931. This truck was sold to the Bethlehem Volunteer Fire Department in 1961 for $1.00 and was later resold. After the museum started to grow, the firemen began trying to find the first truck, but nobody seemed to know where it was.

"We just kept asking everybody we saw in any fire department in any town," said Chief Tignor. "Finally we got to Concord and learned it was owned by a Texaco distributor who used it for advertising purposes."

When the firemen went over to see it, it was covered with dust and cobwebs and "looked awful," but they bought it back for $1,500. The only way the 27 firemen, most of them volunteers, could finance this was by signing up for a $10-per-month club. They contributed until the truck was repurchased.

Tignor, a former mechanic and another fireman, Frank Burns, restored the truck. It took 20 gallons of paint and two primer coats before it was right.

Another item of interest in the museum is a 1927 hose cart - the first piece of equipment used to fight fires in the town.

The hose on the cart was hooked to the hydrant and the nozzle was taken directly to the fire. The large wheels are new, but the body is an authentic hose reel. Several men were used to pull the cart.

There is also a soda acid fire extinguisher on wheels, which had to be drawn by 2 men.

No fire museum would be complete without a brass pole and rail. This enabled the men to slide down almost to the fire truck, and was used locally from 1931 to 1969.

Other displays are an old timey smoke inhalator, a Pompier Ladder, a 35 foot 200 pound wooden extension ladder, leather fire buckets used when the "bucket brigade" was the style of the day, and two leather fire helmets hanging next to a modern day one made of Lexan plastic.

A glass topped Display Case, made from an old dining table from the Fire Department, contains certificates of achievement of past firemen. Also shown are the helmets and badges of past fire chiefs. A long-time city volunteer firefighter, Mr. Tignor is the fourth Fire Chief the town has had and the first paid one. He has been with the department as Chief since October 1973. Charles Ware is Assistant Chief and Charles Peterson is Captain.

Prior to 1931, a T-model truck with some hose in it was parked in an old building downtown, and when there was a fire different men just ran and got on it and did the best they could.

This old garage-type wooden building was the first building to house any of the city's fire equipment. It had been sold and moved, but was found and donated to the museum site to be fully restored. The men moved it by truck, and are working on its restoration.

Because so many school classes visit the Museum, the firemen made something special to amuse them - a miniature fire truck with hose, ladder and firemen climbing to the upstairs window of a model house front. The hose really sprays water, and the children are free to try it.

Outside, they set up a 1945 American La France truck, donated by the Grover Rescue Squad, so that the children could crawl all over it if they wished. It was made for the Navy, has an oversized engine with 24 spark plugs, and will still run and pump water.